The smell of smoky barbecue drifted across town from Agrotrend as men and women sharpened their knives and got ready to battle it out in Australia’s biggest barbecue challenge.

Preparations for the Bundaberg Rotary BBQ Battle 2019 started with 49 teams heating up their smokers on Friday afternoon.

It was a sleepless weekend for Bundaberg couple Paul and Bronwyn Durston from Bulldogs BBQ Australia as the excitement from the annual event started.

Paul said he had little sleep since Thursday, as he prepared about 80kg of meat, including beef, lamb, brisket and chicken.

“We had competitors from right across Australia, including Adelaide and Sydney.”

Paul said each team was normally made up of four to five people, but that didn't stop one solitary barbecuer who put in a great effort and was the overall event winner.

Agrotrend wrap-up from the organiser

Agrotrend organiser Ainsley Gatley said other highlights for the weekend included the amount of quality exhibitors.

Ainsley said the Simply Bushed fundraiser for BushKids was amazing; the crowds were up and bush dancing, with plenty of smiles.

“They are going to be hard to beat next year,” Ainsley said.

“It was also great to see the historical side of agriculture still being promoted through the Rum City Vintage Machinery Rally and Bundaberg Yesteryear displays.”

This year Ainsley said visitor numbers were down as a number of other local events were held at the same time.

However, Ainsley said feedback from both exhibitors and visitors alike indicated the event represented the agricultural community well.

She said partnerships with Bundaberg Fruit and Vegetable Growers, Bundaberg Canegrowers and Bundaberg Agforum were positive signs for 2020. 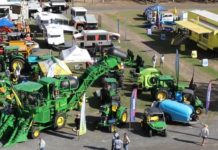