Shalom College students will hit the basketball courts on the Gold Coast these school holidays as they take part in the Champion Basketball School of Queensland (CBSQ) Open tournament.

The open event originating in 1974 attracts a great deal of interest from secondary schools across the state each year with over 120 boys and girls teams competing across several open-age divisions.

Shalom College PE teacher and basketball coach Kylie Giles said they were excited to be part of the CBSQ for the third year.

Kylie said CBSQ gave the students an opportunity to compete against different age levels, from Year 7 through to Year 12.

“We were then supposed to be in championship division (division 1) this year but with one of our Year 12 players leaving school and another injury … we decided it was best to stay in division 2 again this year as we are quite a young team in an open school competition.”

By playing in this competition Shalom students have opportunities to be seen by other schools that offer basketball scholarships.

“As well as scouts for American colleges and NBL1 north and QSL teams looking out for up-and-coming players,” Kylie said.

“Our goal again for this year is to win Division 2 and play in championship division next year when our team will have had a little more experience.”

CBSQ competition will be held between 16-19 September, at Gold Coast Sports and Leisure Centre, Carrara. 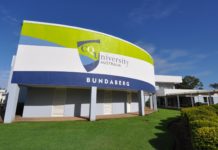